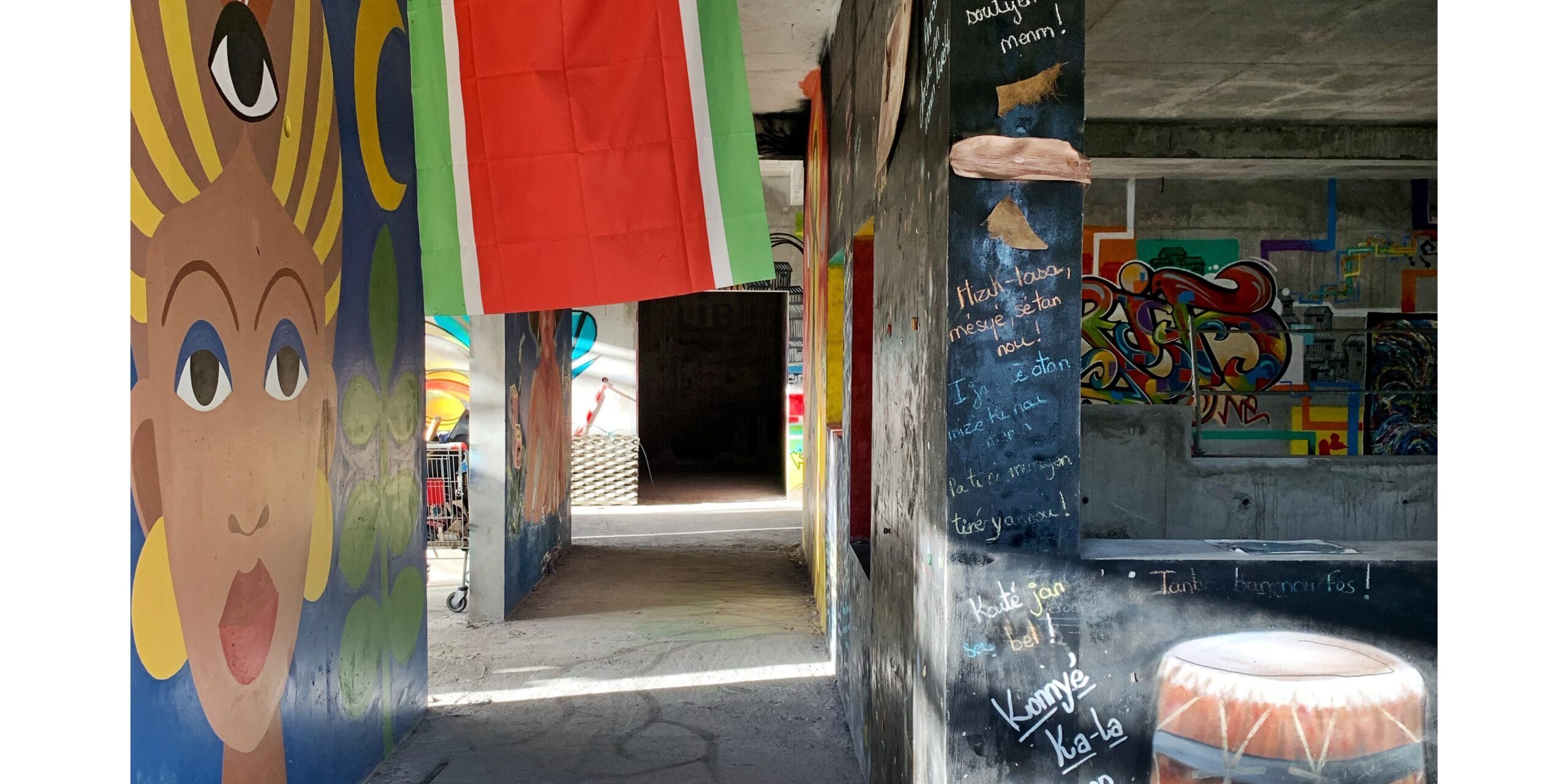 In late March ’22, following two cancelled trips in the past two years due to the pandemic, we were finally back in Guadeloupe. Once we’d navigated all the bureaucratic nonsense involved in being able to travel (mainland France’s frontiers were fully opened but not Guadeloupe’s), it was as always a special feeling to set foot on PTP’s tarmac and be welcomed by the sticky tropical air and by a painting of Akiyo’s François Ladrezeau (a very public figure since his apparition on French TV’s The Voice) on the walls inside the airport.

The trip was very much a family vacation, but also the occasion to meet up with some of the artists featured on the Lèspri Ka comp and give them a copy of the vinyl, to make new contacts for an upcoming vol. 2 as well as a couple of other projects for Beauty & the Beat’s label.

It was a real pleasure to finally be able to deliver the record to Freydy Doressamy, Marie-Line Dahomay, Darius “Dao” Adelaide, Michel Laurent and Tosh Montella (of Gaoulé Mizik), Jean-Claude Emboulé, and Henri Louis (of Groupe Béloka). I also dropped a few copies at Jules-Henri Malaki (of Makiyaj fame)’s Sunshine Boutique in Le Moule, pretty much the only music/record shop left on the island.

Equally  amazing was to see (and hear!) the “ka spirit” well alive and thriving all across the island, from Basse Terre to Pointe à Pitre to Le Moule, in all its multiple forms of expressions, be it at official concerts on the island’s most prestigious venues,  lewoz all nighters, or impromptu kout tanbou on the streets, from gwoka tradisyonel to gwoka moderne, from carnival and répertoire classics to the latest expressions and creolizations of the music. 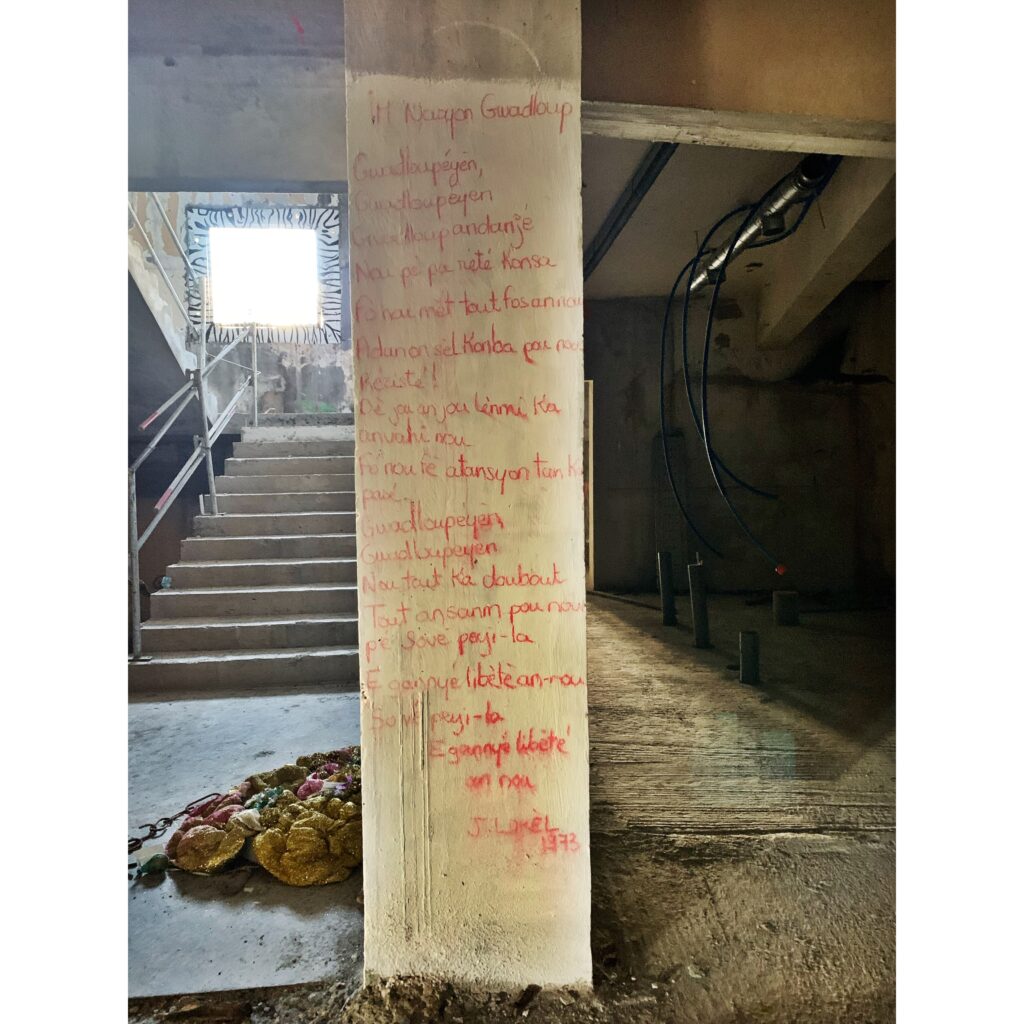 The concert in Basse-Terre was organised by the Défi Vokal Rézistans, a pretty extraordinary and impressive “ka choir” set up under the impulsion of Marie-Line Dahomay and José-Gérard Toucet’s Vwakalité association, in support of the hospital workers who lost their job after refusing to be vaccinated. A couple hundreds of vocalists, most of them untrained and with only a few days of rehearsals, covering classics from the gwoka repertoire, then followed by a mighty déboulé from Voukoum, the cult “Mouvman Kiltirel Gwadloup” born in Basse-Terre in 1988, united to raise funds and show solidarity for a good cause – what a show that was!

The whole show is available here, and you can see some choice moments below:

To complete the story, and highlight even further the importance of the role played by the ka family at the forefront of every struggle for social justice in Guadeloupe’s society, here’s the same Gaby Clavier a few months later being welcomed outside PAP’s court by an impromptu kout tambou, with no less than Fritz Naffer on the mic and the familiar chorus of Gui Konket‘s hymn ‘Kimbe Red‘:

Jumping back in time to a month earlier, we’d found ourselves outside of that same tribunal for yet another one of those impressive kout tanbou (“coup de tambour”, literally meaning “drum hit” but more generally an impromptu gathering in support of various causes, with members of the ka family taking over a street corner and going through classics from the repertoire) which seem to happen on a quasi daily basis in Guadeloupe. This time it was in support of the trade union leader Élie Domota, spokesman of the LKP (Liyannaj Kont Pwofitasyon) and also ex general secretary of the UGTG, and the great Fritz Naffer was here again, mostly on the boula drum.

Fritz Naffer was a founder of Foubap, a militant gwoka group which released their cult LP Eve On Pwen in 1984, and the writer of the track ‘Metropole’ which has become part of the repertoire and is often played during these kout tanbou.

He later often teamed up with Christian Laviso’s various projects, playing the makè on Horizon‘s seminal first LP Gwoka (from which ‘Ti Malo‘ is taken from) as well as with (the gwoka moderne supergroup) Simen’N Kontra.

◦•●◉✿ ♪ ✿◉●•◦
As I mentioned above, we were also extremely lucky and grateful to be there to witness not one but two extraordinary concerts for a one off, invite only event at the superb salle Robert Loyson in Le Moule to celebrate the reopening of nightlife cultural events in Guadeloupe – thank you Sonny for the tickets!
The first gig was by the revered Trio Laviso, the project of master guitar-ka player Christian Laviso alongside Sonny Troupé on drums and Aldo Middleton on ka. These musicians are an absolute joy to watch, three absolute masters at their respective instruments who have been immersed in gwoka culture their whole lives and are constantly evolving and pushing boundaries.
It was an incredible performance and had the evening stopped there we would have been more than fully elated. Little did we know what was about to happen on stage next…. The Souflan Ka Sonné project of Jean Fred Castry and Marcel Magnat that is.
JF Castry is the legendary saxophonist who played on the seminal Gwoka Modenn LP by Gérard Lockel (one of my favourite albums of all time), and Marcel Magnat is the founder of Tumblack and Van Lévé. With Souflan Ka Sonné they continue their experiments in gwoka, in the spirit of Lockel’s and in rather spectacular fashion. Add to this the freeform moves of danseur extraordinaire Ovide Carindo and it made for a show which was nothing short of exceptional.
To top it even further, what with the concert being invite only, pretty much everyone from the island’s gwoka family was in the room, including Daniel Losio, Fritz Naffer and members of Indestwas Ka who all later joined on stage for one of those extended jams that will linger on everyone’s minds for a very long time. Truly special moments.
◦•●◉✿ ♪ ✿◉●•◦

While in Pointe-à-Pitre we also visited Lena Blou‘s dance school (more on that on a later blog) and the Centre des Arts nearby. Once the bastion of Caribbean creation which saw performances by Miles Davis, Kassav’, Patrick Saint-Éloi, Gérard Lockel, Trio Laviso with Kenny Garrett, Kimbòl, the current state of disrepair of this legendary venue/cultural centre which was closed for refurbishment in 2008 never to reopen is the symbol of both the blatant disregard from the French state towards Guadeloupe and its former colonies -and particularly their rich and specific cultures, as well as the lack of cultural ambition and non-consideration of culture in its broad sense in the political reflections of the local governments.

Built in 1978 by the then communist mayor, it has now been left to fall apart by the powers that be for thirteen years (!), a huge, ugly and unsafe block of concrete in the middle of the city.

To raise awareness and help revitalise the cultural centre, local artists and militants have joined forces since September 2021 under the CAC Mouvman Awtis Rézistan banner and decided to occupy the multi storey multi rooms maze of a space to bring it back to some kind of life. Indeed, when we visited it in early April, the place was vibrant, with a hip hop/breakdance workshop on the top floor, a video shoot in one of the iconic (and now rather eery) concerts rooms, and paintings, art installations and arts and crafts stall pretty much everywhere you look.

While its future still remains uncertain, within less than a year the CAC has once again become a cultural mecca in the city, a place where painters, sculptors, dancers, slammers, singers and musicians meet, mingle and perform on a daily basis, complete with a full calendar of workshops ranging from hip hop, capoeira, painting, yoga, creative writing… and, of course, gwoka.

Last but not least, here’s a 3 hour mix (split in 2 parts) I did, on an exclusively gwoka tip, linking the traditionel roots of the genre with some of the many shades of gwoka moderne, as the music constantly evolves and incorporates touches of jazz, zouk, dubstep, electro and much more.