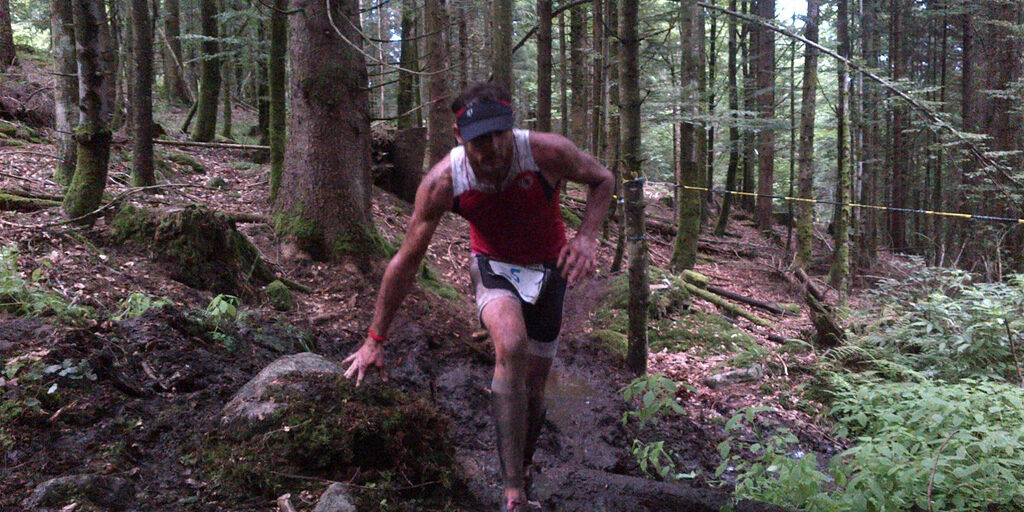 For the 3rd year in a row, deep in the French Vosges, Xonrupt has turned into the European mecca for mecca. Paul Charbonnier and his team have gone from 300 to 500 to now 700 racers and the race sold out months ago. These guys have also been running the classic Gerardmer triathlon for a long while now, so they know quite well what they are doing.

As per tradition all of us Brits (sic) took comfort in the very same chalet we’ve rented for the last 3 years and of course, we know where the bed is (it’s too small), where the boulangerie is and we’re only 2 min from the course. Talk about déja vu.

A sleepless night for me made a nap mandatory before a 1st bike course recce with my mate Pierre Yves Facomprez (PYF) on the Friday. I seemed in good shape, but every time I go riding with proper mountain bikers I realise how far I am from these guys technically. Wherever I tense up while facing a drop or sharp slippery bend or wet root, the likes of Facomprez, Holmes, Wadsworth, Gardner, Carloni and all just make fun of it all and actually turn the terrain to their advantage. I will need good lungs come race day, cuz I won’t gain anything on the downhills for sure.

Last year’s was a mudfest and this time it was more of the same, albeit on an even longer course – yes, despite this already being the toughest xterra race on the planet and boasting the longest bike course, 4k were added this year – just to add up to the “tough guy” reputation I suppose. I went on my own on the Saturday, aiming to somehow reach the col des Grosses Pierres to catch a sight of the Tour de France riders, but I failed as I got lost on the way, ending up riding 2.5 hours – way more than needed. Happy riding though, I always love being here, I can smell the earth – and even taste it sometimes…

With the few good results I had earlier this year over in the Pacific, plus an article on the xterra website on my “other life”, I found myself a busy man doing interviews pre and post race…not much of an outsider any more! Plus with my mug on every race programme, I was never gonna be incognito really.

So race day came around, late start as usual, rained all night, mud tyre on, let’s go. Except that the start line is still as narrow while the amount of racers has tripled…Cue mayhem in the first 400m or so, which for me meant some dude wrestling me from my waist down – had to turbo kick a lot to get rid of the leech, which put me in the red from the start and I never was comfortable on that swim at all. I was out of T1 in about 30th, 2min down on leaders, so not catastrophic. But breathing hard already, and Carloni is with me and I know he’s too fast; my aim now is to keep him in sight for as long as possible. On top on the first lap I was already in 6th place, having passed Thijs, Luxem, Allen and Augueux…game on. Really poor descending on my part, but I felt much better on the 2nd lap (having finally recovered from the swim), saw Marceau riding the wrong way but that was for a broken chain, took a few tumbles in what was now a real bourbier as we French say, but still was 5th in T2. I didn’t expect much from the run but my legs felt great and Francois wasn’t that far ahead so I pushed a bit, caught him and got excited. Then cramps came on, the usual dreaded abductor cramps which I seem to get whenever I have to bike hard, and I knew I wasn’t gonna grab any more spots. I cruised to the finish line rather satisfied, more than 3 min down from the professor Nico Lebrun in 3rd so no regrets. Very impressed by Asa Shaw who absolutely dominated the field, and glad to see my friend Llewllyn Holmes coming home in 5th just behind me.

Not much time to hang around to party unfortunately, had to dash, clean, pack, dash to Basel airport. Missed my plane anyway, so I celebrated with an evening at a nearby Formula 1 hotel. Glamour profession.