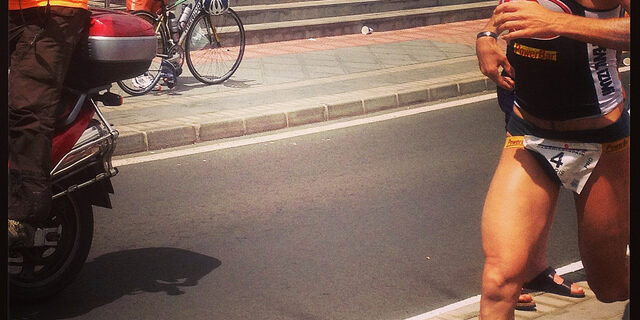 A fiasco of a (70.3) race on a personal level, but a lovely week-end nonetheless with great friends on an island ever so majestic. Biking legs were totally missing, and I knew it as soon as I got on the bike…the same course where I had a ball last year and was dancing up the col turned into a march of hell this year – 12min slower ! At least I could run almost normally, Achilles was ok, 1h18′ on the 1/2 marathon is just about decent.

What was originally my first “A” race of the year had now a slightly different connotation…as well as being very keen on discovering the island, I went there in search of some confidence on the bike. The lovely Fay Dellimore offered a room to share and off I went.

1st surprise: I lost 5 teeth off my big ring during transportation (!). I thought i’d done them all, but obviously i’d never thought about that one. Luckily the local bike shop in La Santa village was still open at 8:30pm and sorted me out with a new ring.

2nd surprise: Lanza is infamous for its windy conditions, but I never expected it to be that bad…all the uphills are in a monster head wind that turns a course otherwise not so hard into a mental beast to tame. On race day the conditions were apparently the worse in the history of the race…

After my usual swim, I came out 30th and felt ok starting off…the legs were back and I did enjoy myself…for 80k that is. I hadn’t recce the course and the climb of Mirador del Rio got me big time – from there it was a march of hell (part 2) till the end of the bike. On top of that the morning rain had swiped all the (dry) lube from my chain, and I had to stop several times to put the chain back on. Not fun at all. Truth be told the scenery is absolutely unique and lunar, but I can’t exactly say I enjoyed it. Not then anyway. I pretty much freewheeled the last 50k, and didn’t even think twice about starting the run as this would have destroyed me for the Xterra season starting 2 weeks later. However this was the first time a DNF wasn’t forced by an injury, and the shame was there. Big time. Days like this I wonder why I’m doing this…hopefully the wheel will be turning soon!

However, big props to the one and only Fay Dellimore for welcoming me, cocooning me and for being such an all round fantastic person – the trip to Lanza was worth it just for meeting you.