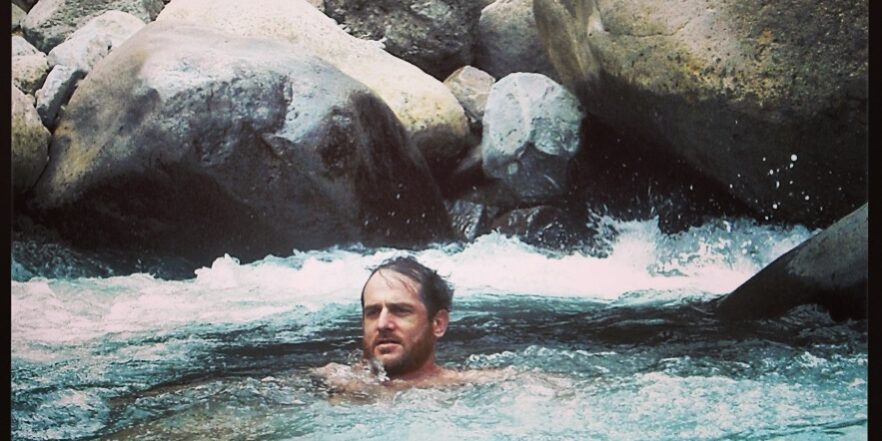 This winter I’ve decided once again to treat myself with some exotic early season races, not in SE Asia as last year, but in the Caribbeans. Not on dirt but on tarmac. The good excuse being my dad lives in Guadeloupe, and my mum could join us as well. So the plan was easy, two 70.3 races in 2 weeks, one in Guadeloupe and one in Puerto Rico. Niiiice.

Problem is, a neglected sprained ankle in mid January led to an inflamed and unhappy Achilles by the beginning of February to a complete inability to run a few weeks later. I flew out with a somewhat different goal in mind…some quality sunny training / holiday time, with the faint hope of a miracle keeping me on the edge – after all i flew to Guam with a stress fracture last year and it was gone when I got there.

After a never-ending 24h journey (!) , there wasn’t much time to adjust to the local heat and humidity levels as the first race arrived only 3 days later. Taking place in and around Saint-François and with an 11am start, this promised to be a seriously hot and fast one. Benjamin “The Fish” Samson, still very much the aquatic legend, morphed into a dolphin to set himself in the lead from the start, with Stéphane Poulat on his feet. Those two reached T1 in no time, almost 5′ ahead of me, with Hervé Faure (and a few others !) in between. On the bike i had my work cut out and set out at a strong pace , knowing the run would be a tough one. Despite a mechanical that cost me a good minute, i arrived in T2 in 3rd, some 10′ down on an impressive Poulat, and 3’30” down on Faure. I thought I’d try to run because it simply is heartbreaking to stop in T2, so went out on the (cooking hot) golf course, barely running as i couldn’t use my right foot. Knowing i was doing some serious damage, i finished the 1st loop through the marina and called it a day; in any case injury aside i would have had a tough day out there just trying to hold on to my spot…

I’d been dreaming of a podium shot next to the 2 legends that are Poulat and Faure, but it wasn’t to happen….Poulat ended up winning by mere seconds with Faure turning up an impressive 1h 14′ half marathon ! Jeanne Collonge won the women’s with a no less impressive 1h 17′ run!

Disappointed of course even if an expected outcome, though i quickly consoled myself with some ‘ti punch and a mighty langouste. Yes please !

The next 10 days in Gwada were spent with some quality riding around the island, the kind of riding that includes tropical rain and flash floods, windswept roads and careless drivers, (lots of) hills with 20%+ incline, welcome stops to refuel with some ginger Vita Malt and coco juice, wheels exploding in the heat (fact), etc. I swam pretty much everyday too, all in the sea, with only one jellyfish encounter. Drank lots of rum too. Including some powerful 62% Longueteau ! When in Rome…

Puerto Rico is only a 1.5 hour flight away, but arriving in San Juan from Pointe-a-Pitre feels like landing on another planet. San Juan is a bit like a mini LA, with millions of cars and highways and gigantic malls with all the usual corporate junk food emporiums at every corner. The Conrad Hotel has a casino inside and a Dennys in the lobby. America here we are, and not the good bits of it. But soon enough we got away from the mass tourism spots and had some lovely organic dinner in the old San Juan, explored the tropical rainforest of El Yunke, ate some fresh clams while sipping on a coconut by the side of the ocean and felt a lot more at ease. The island is big and sadly we wouldn’t see much of it. I bet away from Babylon this must be a treasure…But despite the injury I was still here to race. Luckily we had a car or I wouldn’t have been able to recce the bike course – this is highway territory. Cyclists are only allowed some 15k out of the hotel (where the race starts). The course is pancake flat, with only hoyos (potholes) and iguanas to worry about – dead and alive, lots of them. Bunny hopping is often a good option!

The road to the start line wasn’t an easy one to say the least. After blowing up my front wheel in the Grands Fonds of Guadeloupe (!) (respect due to Lars of Carbon Bikes Solutons for sending me a new one pronto), 2 spokes broke on my back wheel the day before the race. I rode 20 miles with a bent wheel and got a flat in the process. But all got repaired in time. The evening before the race I am about to go to bed when I check my tires one last time…the back one is flat. I fix it, pump it and it blows up. Then I notice a huge hole in the tire, where the tube goes and blows when i put more than 40psi…It is 10pm and the race is at 7am. No spare tire to be found. DIY then. 2 patches inside the tire, then I send my dad with a beer in hand to the corner shop to buy some superglue (!), which i spread around the hole. It has to do the trick.

In bed at midnite, and up at 3:30am, surprisingly springy. I know I have to finish this race. The field has to be one of the strongest I’ve ever been in; the day will be tough. I finish the swim almost 5 min down, unable to swim in a straight line once again (gotta work on sighting more), then start to crush the pedals as relentlessly as I can. I will only catch 2 or 3 guys; all the others ahead are going faster than me…I still ride a 2h12′ for 90k – Ben Collins did 1h58′ (!) before overheating on the run and attempting to cool off in the ocean (!) with 5k to go and a 4′ lead (he failed and got taken to the medical tent instead). After 1.5 mile of the run my achilles was already crying and I settled on an awkward rhythm, half limping and landing on my heel on my right foot. Not good. But I had to finish to break this DNF spiral and shake the mind from this broken body. I got beaten by 2 female pros and 1 age grouper and ran in 1h28’…but i got my (ugly) t-shirt. When I returned to my bike, the back tire had blown up…

– On that kind of course I need a disc wheel at the back, and (a lot) more strength in my legs.

In any case I am far from the level of the guys at the front. I mean the winner Andrew Starykowicz is the actual record holder of the fastest ironman split ever, 4h04′ at IM Florida. Fighting above my weight here…