After 2 months off post Maui, and barely 6 weeks of training in my legs, the appeal of a race in the Philippines had obviously a lot more to do with the incentive of a tropical holiday than the buzz of toeing the line unfit next to the likes of Craig Alexander or Luke McKenzie. The plan was to spend 10 days or so in paradise (the beautiful island of Palawan that is) with my babe, before flying back to Manila and head out to Subic Bay. 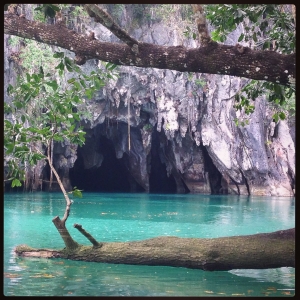 On our very first evening on Palawan, we went out into Puerto Princesa and the first thing we put in our mouths was some tamilok, a woodworm that you eat raw dipped in some spicy vinegar. Very slimy and not exactly a pleasure to eat, though for sure this couldn’t have been more exotic. We didn’t think much about it afterwards, though we’d come back to it inquisitively a few weeks later… 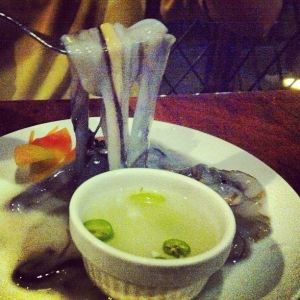 After the obligatory (and totally worthwhile) trip to the underground river, we stayed 2 nights at the Peace and Love resort near San Vicente – by far the more elegant lodge we got, in a majestic location, just a few miles off Long Beach. A virtually unspoilt 10 mile stretch of a (white sand) beach which we had virtually to ourselves, a couple of kids and a bunch of local fishermen. Had a great swim there followed by a 50min run barefoot on the beach. 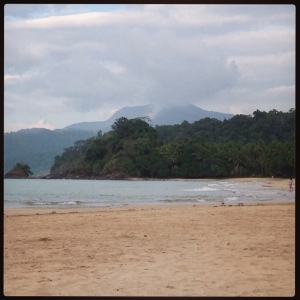 We then drove to El Nido on the northern tip of the island, a lovely little town from where you can go island hopping or on scuba diving excursions, and also where 90% of the tourists are staying. A lot of French people around for some reason, both tourists and residents. Nice food, fresh fish (unicorn!) and seafood, papaya every day, island life kinda pace…what more could I ask? 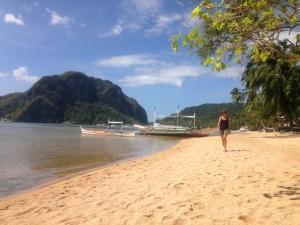 However I was not feeling 100%. For one I still hadn’t recovered from the rather easy beach run a few days before, and a small rash on my belly has started to develop. One night I felt nauseous and barely slept, and the following one I was wiped out with fever. Then I seemed to be getting better but still not quite right, always somewhat tired. I attempted to ride once (doing loops on a 8km stretch of tarmac – the roads on Palawan are a mix between dirt tracks and unfinished portions of tarmac, and driving around feels a bit like being in a video game. Not exactly TT bike friendly.) though I managed to crash on the last downhill (succession of pot holes + a step in the middle of the road (!) + sun in my eyes = heavy crash and road rashes all over my left side). I swam almost every day (including in a sea of giant jellyfish!) but never managed to run again. On our last day in Palawan the Filipino’s equivalent of the Montezuma’s revenge or Cairo’s two step (sic) started and wouldn’t stop until over a week later…

Back in Manila I left Silvia who headed back to Europe after 2 months on the road, and picked up my dad who came to see me from Vietnam. Subic Bay might be  less than 200k away from Manila, but it took us a good 5 hours to get there by car, the traffic to get out of this sprawling mega-city being possibly the worst anywhere in this world? In any case a 5 hour drive across Palawan plus a 1.5 hour flight followed by another 5 hours of driving didn’t do much good to my body. Smashed.
The next day we quickly realised that Subic Bay offers very little interest, this being an ex US Navy base now turned into a freeport resort, cut off from the real world by various gates and checkpoints, very much sanitized but absolutely soulless. The kind of place you imagine retired militaries going on holiday. Nothing authentic here, it doesn’t even feel like the Philippines. Well at least I can focus on training and resting! But my body isn’t getting better. I need 4 pit stops before finally being able to run normally (1st time this ever happened to me), albeit without any energy. On the bike I don’t have any sensations whatsoever, and I can’t even sleep or nap properly.

Come race day I didn’t have much illusion but still I thought I’d just finish the best I could and go back home to train hard again. Well the swim was ok. The bike was painful, not helped by the fact that this is the dullest course in history, pretty much a straight 40k stretch of road on the highway (and back) which makes a threshold session on the turbo in my living-room a piece of heaven in comparison. Basically everything that made my time at xterra Philippines in 2012 such an unforgettable race experience (wild animals on the course, huge local crowds cheering along the course, running through people’s backyards etc) wasn’t gonna be repeated here…but that’s ironman for you. Anyway I never felt good and had zero pleasure but I finished the bike, not in a good state though not totally smashed yet, far from the lead but in 7th and happy to start the run. Only had 2 gels on the bike, couldn’t take any more, especially after missing the last aid station (actually I was given an opened bottle which duly exploded when I grabbed it…). Out on the run, although quickly in 6th, I wasn’t exactly flying. The heat had become overbearing by then, and as soon as you’d finished a bottle your mouth was dry again within seconds. Still at the turnaround I thought I might have a chance to catch the 5th spot, then 5min or so ahead of me. However that is also when I was forced to a pit stop for #2 (first time ever in a race). After that I could barely run any more. Tank was empty I figured. I grabbed a Gatorade bottle and drank it all, only to regurgitate it a hundred meters down the road. My pace was about 10 kph by then, I remember seeing the sign 15,5K and thinking these were gonna be the longest 6k home ever. And yes they were. The lead woman Parys Edwards ran past me like I was walking. I only made it to the finish line because I figured out this would be the best place to collapse, but it wasn’t pretty at all. Moments after crossing the line I was shivering by 40 ºC!

So…what went wrong? Back in Italy, Silvia told me she’d been sick on the plane and got high fever soon after she arrived, forcing the doctor to give her a strong antibiotic to treat the unidentified bacteria. My own journey back to London was the stuff of nightmare. After flying to Guangzhou, China where I had to spend one night before the final stretch to London, I decided to go for a dinner at the hotel that included some unidentified meat (I never want to know what that was). I woke up in the middle of the night with painful cramps and diarrhea, soon followed by vomiting bouts – and this would last for about 20 hours, 11 hour flight included. Strong contender for the worst day of my life. I made it to London, but after being home for barely an hour I had no choice but calling 999, paralysed by debilitating cramps. The ambulance picked me up and dropped me in Homerton hospital, barely understanding how I could still be conscious with a heart rate of 29…I spent the next 6 days and nights in hospital, on a drip for I was unable to eat without getting unbearable cramps for hours in a row, getting weaker and more tired every day, being given various painkillers (paracetamol, codeine, morphine), anti spasm and anti sickness injections, but not being treated! I do understand the doctors’ (I saw 6 of them) reluctance to prescribe antibiotics if the bacteria hasn’t been identified, but in this case I feel it was almost criminal to leave me in that decaying state. I left hospital after 6 days against medical advice, called my friend (also a doctor in A&E) who agreed to stop the damage and brought me the antibiotic I so badly needed. Straight away the cramps disappeared and I was able to eat. 5 days later some energy came back in my body, though progress was slow. As I write this I am still very much unsure about how long the recovery will take, I was in such an extremely weakened state that it could take months to get back to fitness. Crazy to think how quickly your body can shut down!

Paratyphoid fever is almost certainly the name of the infection that caused our misery, most likely contracted through brushing our teeth with dodgy tap water in El Nido. Quite a serious disease if left untreated, though easily curable with antibiotics. The blood cultures and stool samples didn’t show any growth, but I am told these are only 30% accurate meaning most of the time you’ll never know exactly what the bacteria was. All I know is that this was quite severe!

Not quite sure yet what to make of my original plan to race 70.3 Vietnam, IM Lanzarote and IM Nice in the next few months….