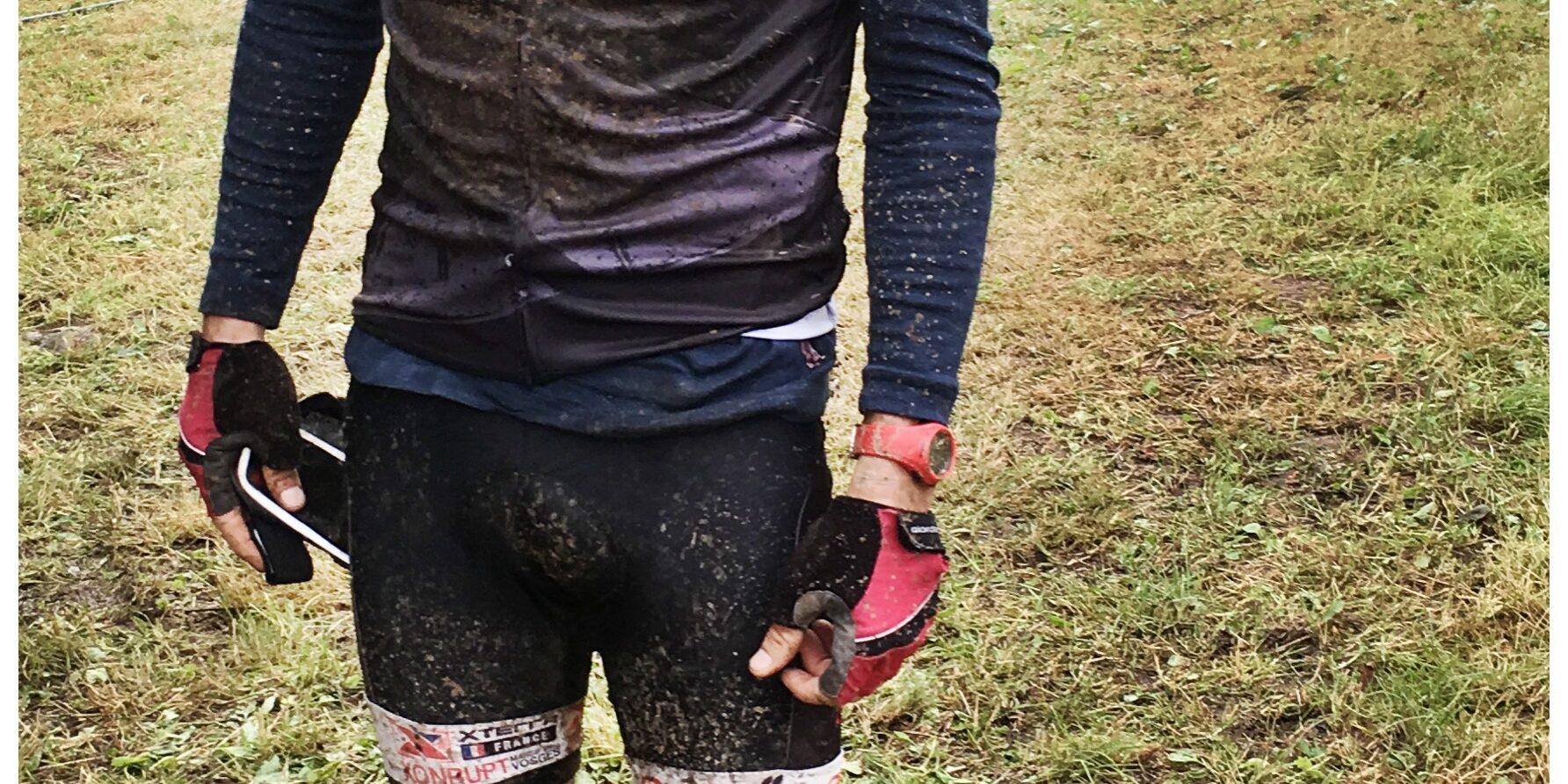 Post Ironman Nice  I allowed myself a full week of recovery (by that I mean not training, as I surely wasn’t sleeping much what with a few parties/gigs in a row…), and it seems my body really needed it as I was still limping 5 days after the race – my calves especially took a good beating on the promenade. The first few sessions back I didn’t feel so great, but by the end of the 2nd week I started to feel good again. To feel actually stronger than before the IM, in ALL disciplines (even in the swim, go figure). I even did a couple of PBs on my usual loop on the bike, and some really strong runs. Having now done a dozen ironman or so (and completed 8) I can see a pattern in that after an IM (even a tough/painful one) I start feeling stronger within 2 to 3 weeks later. Not a  scoop, this is called overcompensation. All that to say that my plan for xterra France was to decide at the last minute whether or not to take part, but given the fine form it was a no brainer…I booked myself an airbnb in Le Tholy, some 25 min drive from Xonrupt, and off I went.

This was my sixth time in the Vosges since I first came for the inaugural xterra in 2010, having done 4 xterras from 2010 to 2013, and the great Geradmer XL road triathlon in 2010 as well. Why ? Because the races are organised by the Charbonnier family at a high level of professionalism, and because I fell in love with the region (Alsace). One year we had a massive heatwave, but generally rain is expected with mud a gogo. Also this is the toughest xterra on the circuit along with Scanno’s, meaning a perfect training race for Norseman 5 weeks later. Or so I thought… 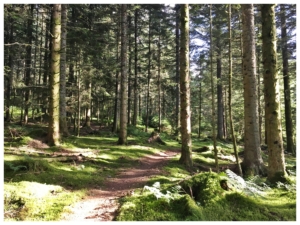 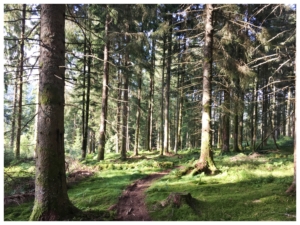 Landing in Basel on Friday lunchtime, I drove the very familiar route to Le Tholy, mounted my bike and despite my doziness (I’d slept barely 2 hours) went straight to ride the course, eager not only to test the bike (after ripping a tyre and bending the derailleur as a result of the crash just days before departure, I was afraid the gears might be playing up), but also to try the ‘new’ course (in fact it’s pretty much the same as previously but the other way around). 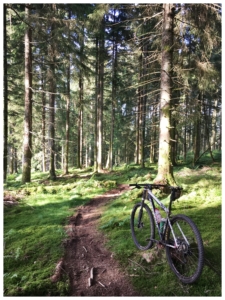 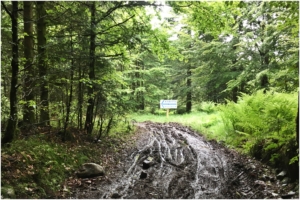 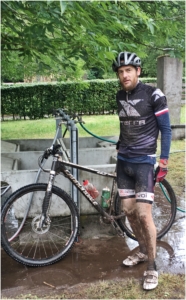 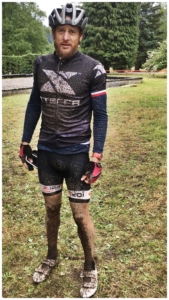 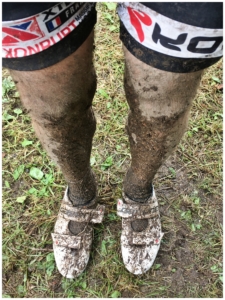 Unsurprisingly, despite the weather being hot, the course had some really muddy sections which forced me to get off the bike a few times on the Friday. The next day the Tº had dropped by almost 20 ºC and it was raining buckets. After a nice swim I got ready for a 2nd recce but the heavens opened even stronger, prompting me to wait in the car for  a good couple of hours. As it finally calmed down, I jumped on the bike and went out to play in the mud. The whole course was now wet and muddy, but this seemed easier somehow (no surprises) and I rode it with confidence, clearing any hurdles I couldn’t pass the day before. Game on then, especially after running 1 loop of the course and feeling the legs light and fresh. Having finished 22nd, 10th, 4th then 8th in my 4 attempts, I was curious to see what I could do this time around with a fine form, but also a field stronger than ever.

The race has a 2pm start, so plenty of time to sleep but also to (over) visualise the various difficulties of the day. In the morning did feel something not quite right with my heart rate after downing a super strong coffee. As I drove to the race course I tried to calm myself down with some yoga breathing technique, to little effect. With one hour to go I cycled my way to transition…only to realise my rear brake pads were…dead. Seems like I’d destroyed the pads during the 2nd recce as they were now separated from the metal part…Panic ensued as – obviously – I didn’t have any spare pads and time was running out. I turned up at the (Cyclestop) bike mechanics tent (who knew me pretty well from previous years’ emergencies !), explained the situation in a not so calm manner, and in less than 5 min new pads were on and the problem was sorted. Chapeau les gars, once again. Paul Charbonnier was there and reassured me that the transition wasn’t closing at any set time – good on me as it was now about 1:35pm. As per custom, all this pre race added stress seems unavoidable whatever i do, but at least I seemed to have calmed down now.

Xterra France is all about the bike really (what with 1500m of positive climbing and a 2 hour + bike section), but it also has the most spectacular swim start as a field of 900 gathers in a space as wide as my living room (almost).

Having done this previously I knew that despite the best will from the race officials there was no way to get everyone back on the shore, so I stayed in holding to the pontoon, finding Ben Allen just in front of me. The gun went off in the middle of the countdown, Ben sprinted away and I followed just to get clear of the field. After 100m I was on my own as everyone else seemed to be on the left side. I literally swam 700m in clear water with no one around me, before joining up with the top end of the field at the first buoy. From then it was mostly cruising to the shore, coming out in 25th position or so and just over 2:00 on the lead. I expected a good swim and had a better one than my last few races, but, truth be told, it didn’t feel that good. 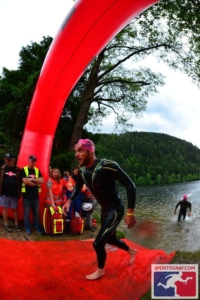 Out on the bike I didn’t find the legs I was hoping for. The climbing starts almost instantly and is relentless for the first 30min or so; as with previous years I was riding at a decidedly unsustainable pace and was gasping for air. I did a couple of mistakes as a result (try going up a 25% incline in mud and wet roots with a heart rate at near max capacity…any hesitation will be paid cash) and started to worry a bit as I really couldn’t breathe. It’s the first time ever I thought about stopping to calm down as I felt I’d smoked a pack of Gitanes sans filtres right before the start…
I didn’t stop but sadly the flatter bits and descent didn’t help me much to recoup my senses. After passing a few guys initially I was now being caught up by Llewelyn Holmes and Christophe Betard as well as a couple of super fast age groupers, unable to catch any wheel. I kinda lost it in my head as a result, and by the end of the first loop I knew my race was over. Heart rate uncontrollable, legs empty and feeling dizzy, with gears not working any more on top of that – the excuses to give up accumulated in my head and despite starting the 2nd loop I stopped and made a U turn halfway up the climb. It is always a terrible feeling to not finish a race, and even more so when there is no injury or ‘mechanical’ involved, and even if I knew in the back of my head that it was probably the right decision, it took me a few days to come to terms with it. 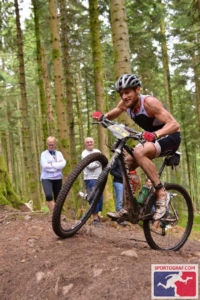 A week has passed and I am still not sure what happened. The day before the race I felt invincible and 24 hours later it was a totally different story. Was it due the (unidentified but super strong) coffee I had in the morning ? Was it a virus I contracted overnight (it took me ages to get out of bed despite sleeping a good 7-8 hours) ? Either way this was a bit of disillusion and I have yet to learn from it. Time to rest, rebound and refocus.