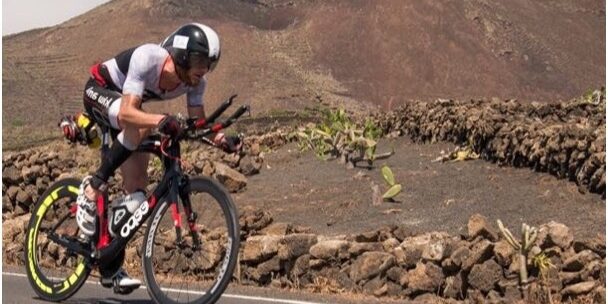 Having declared in my race recap post Lanza 2015 how glad I was to have finished because that meant I wouldn’t have to do it again…well here I was toeing the start line one more time 2 years later. DNF in 2013, 9th in 2015, what would 2017 bring? A hard race that is a certainty, but what else, and why the change of mind? 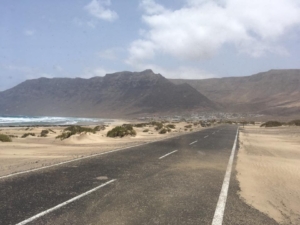 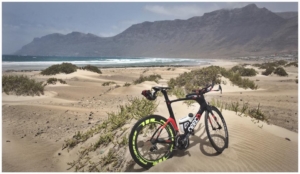 A few reasons actually. To start with, I somehow put in my mind after IM Wales in September that my goal in 2017 would be to attempt to qualify for Kona 2017, meaning I’d have to do 3 more ironman at least (the KPR is based on the best of three IMs and one 70.3). Having gone to New Zealand in March and failed to collect any points time was running out, and with June dedicated to Japan and July to parties, there was no escaping Lanzarote. At least I knew what was in store, but more importantly that this was a good course for me, a hard and honest one with 2251m of climbing which could -on a good day- allow me to hopefully come back from behind after the swim and not be stuck on my own like I was in NZ for instance.
The 12 weeks since Taupo hadn’t gone exactly smoothly in terms of training, with a mix of injuries (pubalgia, broken ribs) and parties making it difficult to have any kind of consistency. All in all I had 3 weeks of solid training and felt I was back in some kind of shape, though nowhere near running as well as I was in February. However in 2015 I finished 9th only 2 months after being hospitalised for a week because of paratyphoid, so I knew that I could only be better!

One of the big advantages in Lanza is that I have friends on the island, Laura and Eamon, now with Carlos and Catalina. They have a lovely house in the hills in Tinajo, and they treat me like a total prince. No shopping to do, no check in or check out, even the wine post race is furnished! All I have to do is focus on the race. I flew in on the Thursday and the wind was absolutely insane, but luckily on race race day it had calmed down a lot (especially compared to 2015) and at least it didn’t feel dangerous to ride anymore. However, having had a look at the start list, my dreams of a top 5 had all but vanished and I was now aiming for a (still ambitious) top 10…

This race has the peculiarity in that we all start pretty much together, the pros being on the front line but ready to be swallowed by the fast age groupers right on our backs…which is exactly what happened after about 3 strokes. No idea how they came in so fast, but one sure thing is that I wasn’t going to swim alone this time. In fact there was still a big bunch of us together after the 2nd buoy, 1k into the swim. Which should have been a good thing for me, but somehow I managed to lose focus on the way back, slowly retrograding, then my goggles filled up, my legs started cramping, and I could tell I wasn’t swimming well. By the time I got to T1 I was in 38th position, some 6.5 minutes down on the leaders! T1 was also a bit of a disaster, with cramps, loose timing chips and mounting bike too early making sure I had my work cut out! 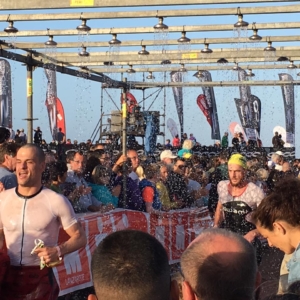 At least this meant I wouldn’t be riding in no man’s land like in NZ, thanks to a stream of cyclists in front of me to play catch up with. My original plan of holding off for the first 120k wasn’t going to happen in these conditions! Luckily my legs felt good and I slowly but surely made my way up, passing mostly age groupers at first then the first pros started to appear, then the leading woman some 50K in to the bike (the impressive eventual winner Lucy Charles, having swam with the top guys). After La Santa I continued to push the pace, making sure I took no one with me, finally catching athletes like Malte Bruns (1st amateur in Kona 2015 and a 40h per week training monster), Trevor Delsaut, KJ Danielsson, Samuel Huerzeler and Carlos Lopez Diaz (winner of IM Mallorca in 2016). Only Timothy Van Houtem had come back from behind (no sign of Del Corral!) but I knew since the Alpe d’Huez LD that he was a much stronger cyclist than me so didn’t try to follow him.

When I reached the top of Mirador Del Rio I was in 10th position and thought I might be on a great day! Problem was I overcooked it a bit on some of the steeper slopes (my 23 ring at the back was clearly not enough!), I was now on my own not only for the descent but also for the last 50K of never ending 1% incline on the highway…and cramps had started to appear.

Without surprise the scenario of previous editions started repeating (albeit on a milder scale), meaning I started to be overtaken by some of the guys cited above without being able to catch their wheel whatsoever. I really hate the last hour of this bike course! And I won’t come back a 4th time to try to crack the code, I’m telling you! 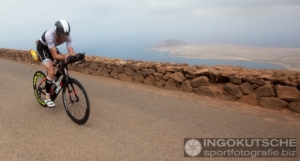 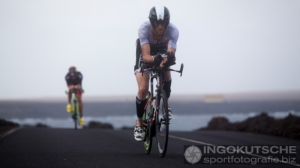 I arrived in T2 in 15th position, more than happy to get off the bike, but nevertheless not as smashed as I thought I’d be. Having a new bike this year, Ceepo‘s Katana has made a big difference in my cycling performance in that it is the most comfortable TT bike I have ever ridden. I can stay in the TT position for hours without breaking my back, and as a result I can run better off the bike. Still running a marathon now seemed like a long way! Less wind meant a hot run, 30ºC and no shade, a real pleasure! The legs felt ok for the first 10k during which I moved up to 11th, but then I had a really rough patch between K10 and K20 and would have stopped it right there if the course hadn’t been changed to one 30k loop followed by a 12k one. No point stopping at K15 because this meant I would have had to walk 15K back to the finish line anyway. A similar ‘situation’ happened to me during my 2nd Embrunman in 2012, hitting the wall really hard barely 5k into the run, but finding nowhere to hide/sleep I carried on to the end of the first loop before finding my legs back miraculously. Here I started to feel ok again from K20 to K30, then it was waves of feeling ok/terrible/ok/terrible/ok. During this time my fellow Frenchman Guillaume Lecallier had overtaken me and caught Delsaut, then I’d caught both of them and crossed the line in 8th. You really never know what is going to happen during the marathon, and you should never give up for that very reason! 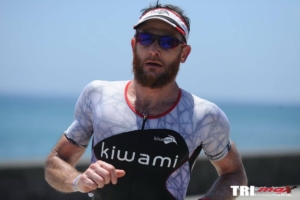 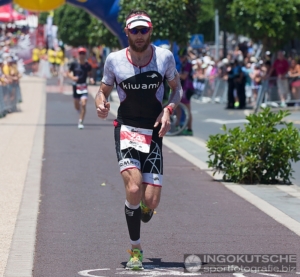 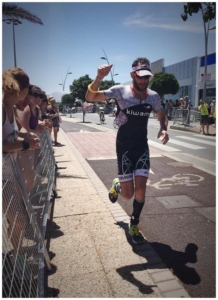 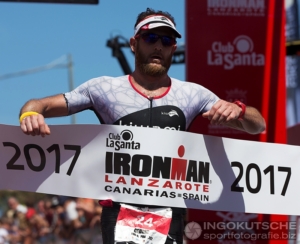 8th spot gets 305 points, which brings me exactly to the grand total of 1125 points at the current KPR. Knowing that the qualification barrier hovers around 3000 points or more, this means I would have to…win…my next ironman if I want to go to Kona. 99% unlikely, but I guess I’ll give it a try. If I feel fit anyway. Probably in Maastricht in August. If not that would have been my last ever ironman. Let’s see!

PS: big thanks to Silvia, my parents, my brother, Laura, Eamon and family, my osteopath Sam Burch who put me back in place only a couple weeks before the race, to my sponsors Kiwami and Ceepo, and to all who have been encouraging, messaging, texting me and those who have read this blog until here!