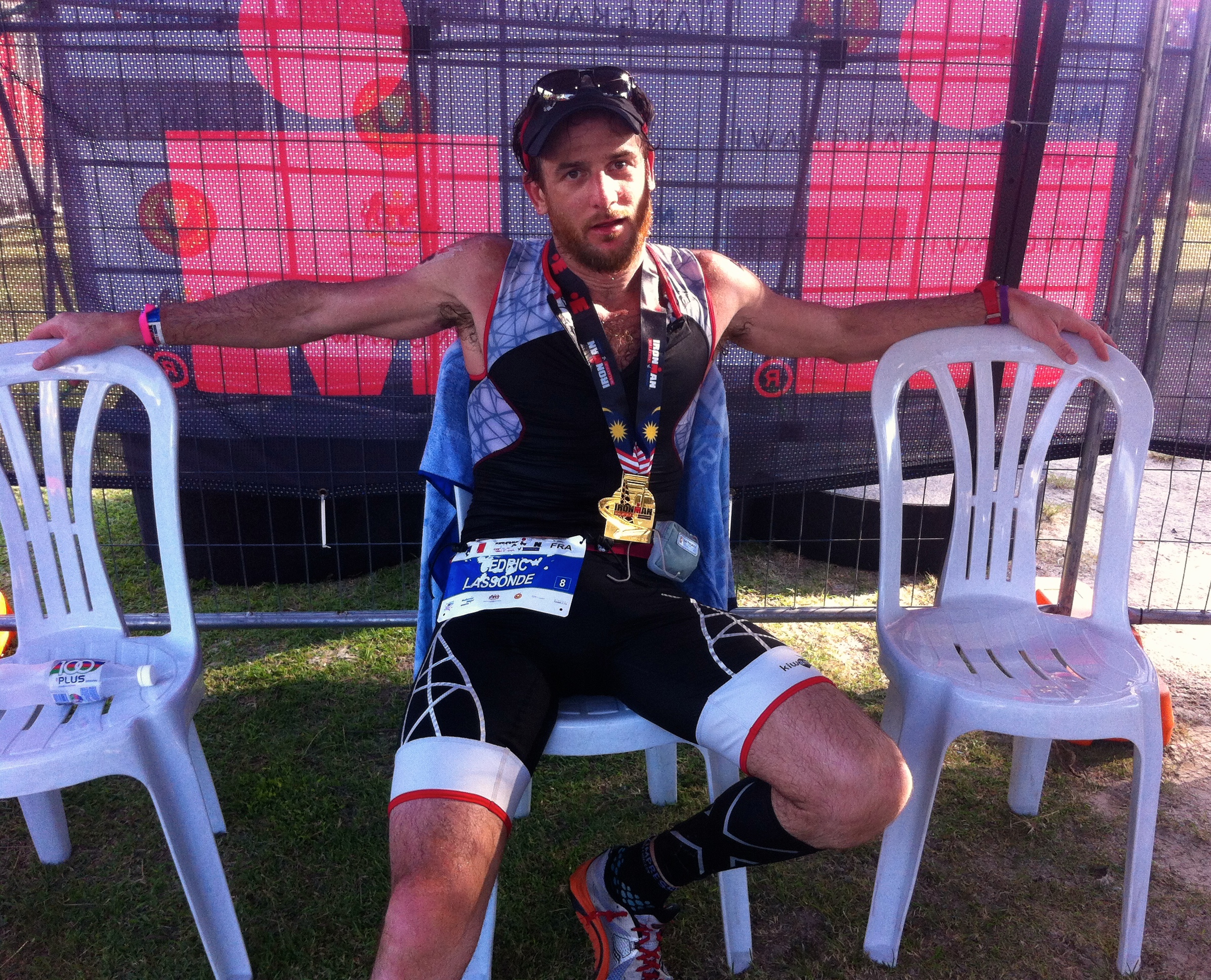 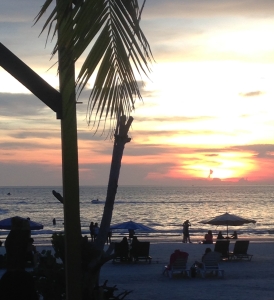 We arrived in Langkawi 9 days before the race, hoping this would mean enough time to acclimatise. On the 1st day we drove around most of the island. Monkeys galore, tropical jungle, coconut juice by the roadside, some steep hills, green waters, and most importantly the dreaded haze was nowhere to be seen. In the week before the race we sampled most of the local delicacies (fresh fish, prawns, rice and veggies, always delicious) without me getting any bug (!); I rode a few times (tropical storm included) and felt rather good, swam a bit and felt ok despite a nasty jellyfish encounter in murky waters, and ran a couple times, including once at high noon just to get an idea…and that was enough to really scare me. Running in 40ºC+ and 90% humidity doesn’t seem to suit me that much! 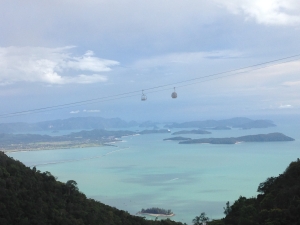 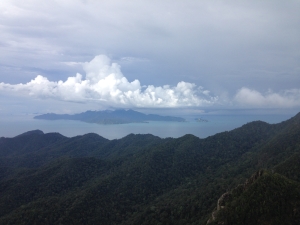 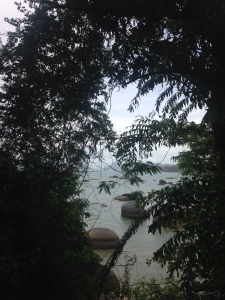 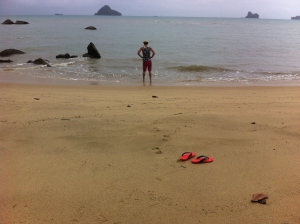 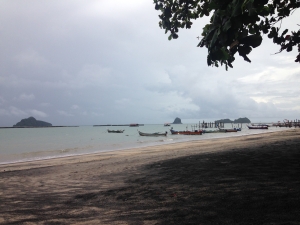 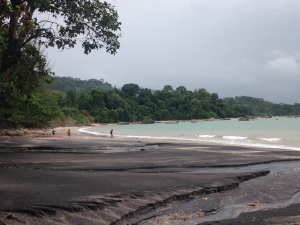 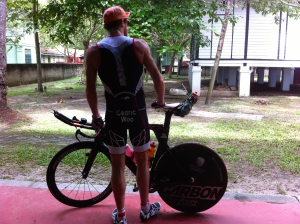 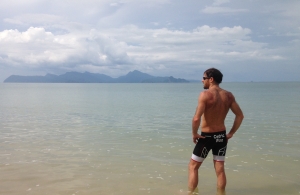 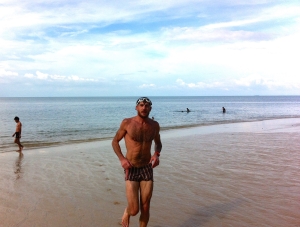 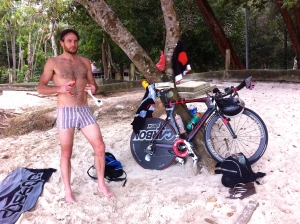 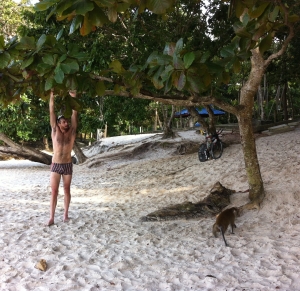 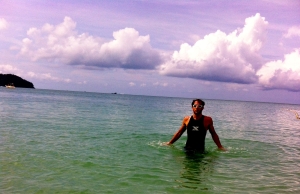 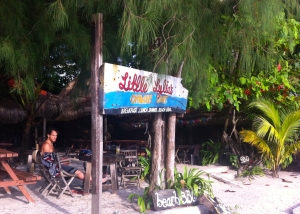 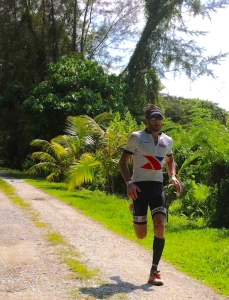 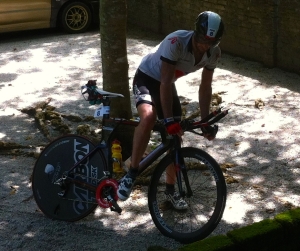 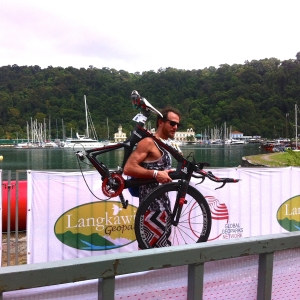 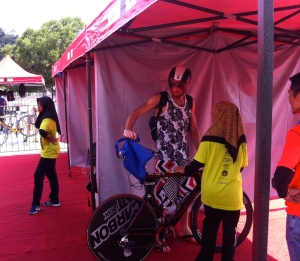 The race went as follows: I swam at my (not good enough) level, the 1st lap rather good but falling asleep on the 2nd lap with a mild headache caused by over-tightened goggles (!), coming out in 56min or so, some 7:00 down the leaders. 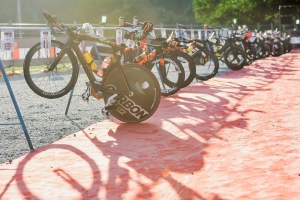 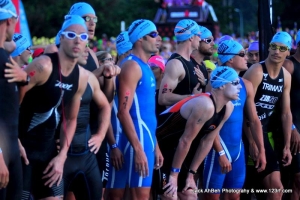 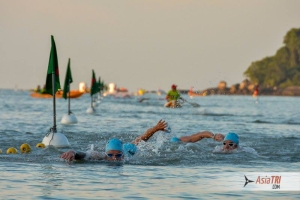 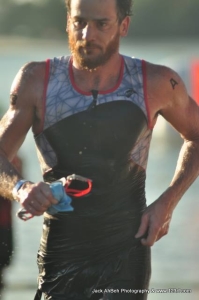 Out on the bike I chased solo for almost an hour to finally join a train that included Mauro Baertsch, Guy Crawford, Freddy Lampret and a young Japanese Kaito Tohara with whom I took turns at the front. The entente wasn’t great however, and the group exploded at the 110k mark, which coincided with me having a rough patch and taking it easy for a bit. By 150K I felt better again and dropped Crawford before catching Daniil Sapunov and, to my surprise, Paul Ambrose just before T2. Cramps however had started to appear (salt tabs had all but melted on my frame), and the bottom of my feet were painful, but as I dropped my bike in 12th, some 20 min behind Romain Guillaume but less than 10 min behind the main group, I was eager to get on the run and see who I could catch… 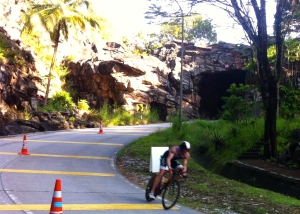 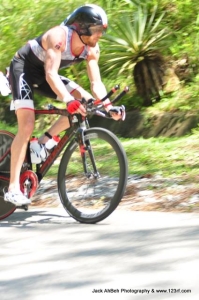 Unfortunately for the 1st time ever this wasn’t gonna happen; the only guys I caught were Balazs Csoke because he was lying by the side with a heat stroke and Guillaume because he blew up and ended up walking half of the marathon. To be clear, the whole run was a march of hell, and I realised it would be pretty much instantly. The heat wasn’t like anything I’d experienced before, Hawaii is mild and climatised in comparison. I spent the first 10K looking for an excuse to drop out (which was even more tempting as the run went past my hotel 5 times!) then I found out that splashing myself with 3 scoops of cold water at each aid station was enough to trick me into running to the next aid station. Clear of all expectations and time splits, my only focus now was to reach the finish line in one piece, which I did after a 3:40 marathon to be remembered. I would never have thought that running at less than 12kph could be so painful. 5min per k was even too much to ask, that is how humbled I was by dame Nature. 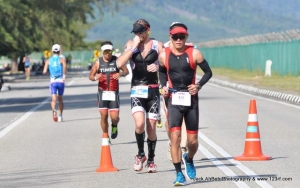 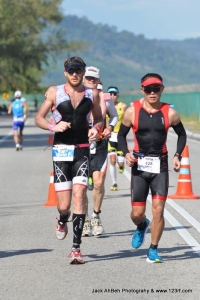 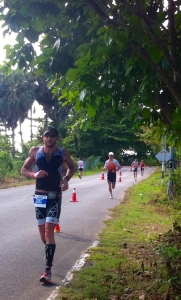 Looking at the results I believe a 5th or 6th spot would have been possible had I been able to run even at a 3:10 pace, but in the end 14th was the best I could do on the day. My mum being there with me, #1 supporter on the course by a country mile, is really what pushed me to finish, and I am so glad I did as there is nothing worse than a DNF, especially so far from home. 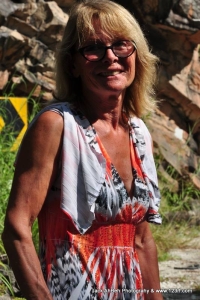 The good news is I had the ride of my life and was in the mix with riders I thought better than me, which should be encouraging for the future. However, after such a disappointing result I am still unsure of my focus for 2016, apart from the Norseman of course (got an elite slot!). One sure thing is that the next 3 weeks will be spent away from any kind of exercise (dancing not included)!